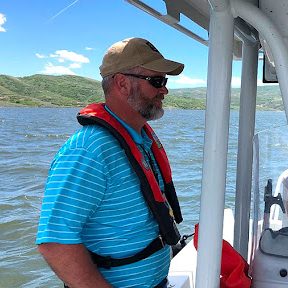 I was born and raised in Plain City, UT, graduated from Weber High School, and obtained a bachelor’s of science in Recreation Resources Management at Utah State University in 1997.  I married the love of my life, Susan Hansen, in June of 1997 and have three children (Cole 21, Maggie 19, and Calder 15).

I started my career with the Utah Division of Parks and Recreation in December of 1997 as a Park Ranger at Willard Bay State Park, Willard, UT.  Highlights of this assignment were the member of Outstanding Team Award in 1999 and the Shift Commander assignment for the 2002 Winter Olympics in Salt Lake City, UT.

I was promoted in October 2002 as the Assistant Manager at Yuba State Park, Levan, UT.

In June of 2003, I became the Park Manager at Utah Lake State Park in Provo, UT. I was able to rebuild a functioning staff and boating program on Utah Lake created a strong working relationship with the Utah County Sheriff’s Office and received the first-time partnership award from the Sheriff’s Office SAR Team. Through communication and trust, strong relationships with municipal and county government leadership were formed.  I also received the North Region employee of the year in 2008.

In 2013 I became the Boating Program Manager for the Utah Division of Recreation (formally Division of Parks and Recreation) and Boating Law Administrator for the State of Utah.  I have updated the Divisions boating training to include a boat operator course similar to the NASBLA Inland Boat Operator Course; boat patrol tactics course (NASBLA seated FSTs, vessel contacts/inspections, high-speed maneuvers, investigations, arrest/defensive tactics, and firearms).  In 2017 I formed the Division’s remote operated vehicle (ROV) recovery team and became the acting team lead.

I have been actively involved on the Western States Boating Administrators Association’s board by serving as treasurer, president, and past president.  I am currently a Commissioner representing boating activities on the State of Utah’s Outdoor Adventure Commission, and a Committee member of the National Boating Safety Advisory Committee