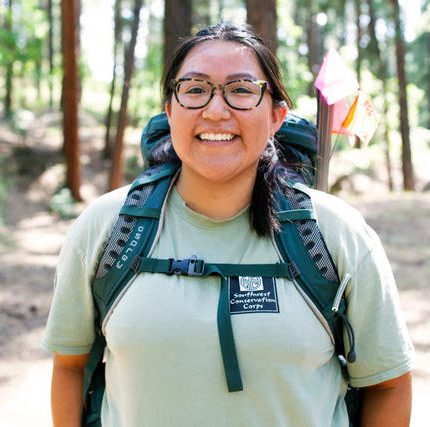 Shandiin (she/her/hers) originally joined Southwest Conservation Corps (SCC) in 2013 out of the Durango office, followed by two more seasons, ending in 2015 leading a trail crew. She moved to Washington to work with Mountains to Sound Greenway Trust, leading a professional trail crew in the Cascade Mountains. While working for SCC (by way of CFI collaborations) and Mountains to Sound Greenway Trust, she gained valuable skills in stonework that translated into her next endeavor. Shandiin began working for a local landscaping company, in Durango, CO, that specialized in dry stone masonry. While working in the private sector she felt a lack of indigenous community and involvement. So, she became a work skills instructor for the Student Conservation Association and plotted her next move. Time and time again, the sacred geography of Dinetah called her back to the stronghold, ultimately leading her to the Diné Program Coordinator, then Program Manager, and now Associate Director position in Ancestral Lands Navajo office. She can be found looking for stones to chisel and place, propagating plants or hiking around McGaffey.